Tu B’Shevat, which translates literally as the 15th day of the month of Shevat, is the Jewish New Year for Trees. Mentioned in the Talmud, the holiday marks the tithing of fruits grown in Israel.

The celebration of this holiday has experienced resurgence recently, celebrated as a Jewish Earth Day.

The fruits and nuts we enjoy at Tu B’Shevat offer an opportunity to reflect on our interconnectedness to the land, water and people who grow them. Creation provides physical and spiritual sustenance to nourish our bodies, souls and communities. As the director of the Heschel Center for Sustainability in Israel, Jeremy Benstein has written, “The natural world is the ground of our spiritual lives, source of symbolism and meaning.”

When we eat foods that are produced in unhealthy ways, we are ingesting ingredients that limit our ability to embody Jewish values and manifest the potential of Torah. By looking at three different types of fruits (hard outer shell, inedible inside, completely edible), we can learn a lot about our food sources. Living in drought-ridden California — the primary grower of the nation’s fruits and vegetables, with $46.4 billion in profits in 2013 according to the USDA National Agricultural Statistics Service — should make us more aware of  our role in this interconnected web of life. 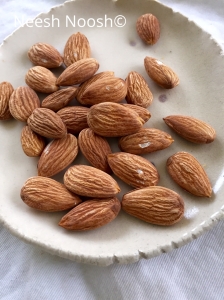 The Golden State grows 80 percent of the world’s almonds. And, the industry is expanding. But this nut bonanza is challenging the state’s already-strained water resources. Growing one almond requires a gallon of water. For the 860,000 acres of California almond trees, it adds up to a shocking 1.1 trillion gallons of water each year.

Water stored in underground aquifers is a finite resource, and much of what we use today has been here since the time of Abraham and Sarah. The state’s flourishing global almond industry is a significant source of pressure on our groundwater systems. Professor Jay 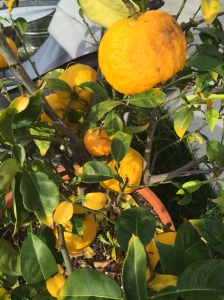 Famiglietti of UC Irvine, in an article in Mother Jones, described the current situation as, “[G]roundwater levels are on a one-way journey to the very bottom of the Central Valley.”

Who grows our food and under what conditions is another hidden cost. Most of us do not see farmworkers doing the dangerous work of planting, tilling and picking (often by hand) our fruits and vegetables, for low pay and often with limited legal protections. More than a half million farmworkers live in California, and they are the critical backbone of the state’s agricultural industry.  Approximately one-third of them are women, and about 40,000 are children.

All farmworkers, undocumented or not, are exempt from basic labor protections of the National Labor Relations Act and the Fair Labor Standards Act afforded workers in all other industries. This leaves them more exposed to on-the-job abuse, poor wages, unlimited hours and unsafe working conditions. The average farmworker family’s income is less than $20,000 annually, with 43 percent of them using public assistance. Consumers pay the hidden costs of these workers living in poverty, as they often turn to charities and government agencies for health care, food and other basic services.

Fresno-based Gerawan Farming is the largest peach grower in the nation. But, not everything is sweet for its workers. The United Farm Workers labor union has been battling with the company (which sells under the label Prima) to raise wages and offer health benefits to its 5,000 workers. The company won’t implement a contract it negotiated with the union and a state appointed mediator.  As a result, employees are losing wages and health-care benefits. In an interview on Al Jazeera America,  employee Jose Dolores said, “I went to work there when I was 30, and now I’m 54, and I’m still poor. I just have enough money to buy tortillas and pay the rent.”

FULLY EDIBLE INSIDE AND OUTSIDE: STRAWBERRIES

The California strawberry industry includes 30,000 workers, many of whom are women and children, and their bodies are often exposed to pesticides in the fields. According to the Pesticide Action Network (PAN), anywhere from 50 to 400 pounds of fumigants — some of the most toxic agricultural chemicals — can be applied to an acre of strawberries. Many of these highly toxic fumigants can cause cancer and can cause damage to human reproductive systems and brain development.

A strawberry farmworker exposed to the fumigant, methyl bromide, told PAN, “Sometimes I couldn’t stand how my eyes were watering and my throat hurt; I couldn’t stand the gas. I would run outside the field to get some air. Now I can’t breathe well, and my vision is blurry.”

The health impacts of these pesticides aren’t limited to workers in fields. Nearby farmworker communities are exposed to pesticides through “drift” and interaction with family members. Dangers extend to consumers, too. The Environmental Working Group ranked strawberries No. 2 on its “Dirty Dozen” list of pesticide-laden produce. 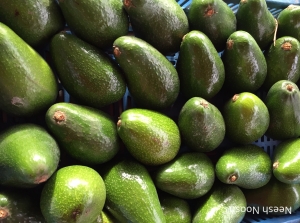 These are actually called Bacon Avocados. But, there’s nothing treyf about them! Carpinteria Farmers Market, Carpinteria, CA

The response to these stories is not to throw up one’s hands and say, “There’s nothing I can do about it.” Rather, it’s to ask, “What can I do about it?”

The Chasidic master known as the Sefat Emet teaches that we are partners with God in awakening a renewal of the world every day through mitzvot. “The ways of the world for the Holy One blessed be He is to run and renew the world every day in a new order. … So, too, a person needs to renew his ways in his service to the creator each and every day” (as translated by “Torah Yoga” author Diane Bloomfield, who lives in Jerusalem).

Eating is a religious and spiritual act of renewal. Every time we buy food and eat, we can choose items whose sources are worthy of blessings, thereby spreading the light of Torah to the dark corners of our agricultural fields. Simple acts such as choosing pesticide-free strawberries, supporting farmworkers’ organizing efforts, knowing your farmers, or supporting efforts to end the use of fumigant pesticides in California will provide us all with internal and external spiritual sustenance.

7 thoughts on “Tu B’shevat: New Year for trees: Savor fruits of the earth, consider their journey”