I’ve had the opportunity the past couple of years to spend time in some obscure (and also not so obscure) Jewish communities whose foods and traditions offered me a glimpse into their lives. I begin with the story of 96 year-old Sarah Cohen, one of a handful remaining Jews in the city of Kochi, a city on the Malabar coast in the southern Indian state of Kerala. While wandering around a neighborhood called Jew Town, I was drawn to a store called Sarah’s, advertising her judaica. Just beyond the modest storefront, whose shelves were filled with embroidered challah covers, kippot and tea towels, was an older woman seated in a deep chair, engulfing her small, gentle frame. With the store’s walls decorated with news stories about her, she’s as much as a draw as the historic “Paradesi” synagogue steps from the store’s entrance.

Me with Sarah Cohen

The exact arrival date of Jews to Kochi is unclear, but it’s generally thought that first ones can be traced back to approximately the first century CE. In the 1500s, Jews from Europe and the Middle East also settled in the area (referred to as Paradesi Jews or foreigners). Sarah Cohen’s family arrived from Baghdad when she was two. In the 1950s, though, most Kochi Jews made aliyah, including her family, but she preferred to remain (click here for more about the history of Kerala Jews and synagogues). The past 30 years she’s been cared for by a local Muslim family. Residents of Kochi are fiercely proud and protective of their Jewish history, and work to preserve and protect its buildings, relics and stories.

No matter who you are, all Indians drink “chai” (ch pronounced like chair), a milky spicy black tea. It’s ubiquitous, served by tea sellers at little mobile carts, in tea shops (often just a small wooden shopfront with a chair in front) or while carrying large metal tins with spigots, rapidly yelling “chai chai chai” on streets, in trains, on beaches, at bus stations and everywhere else imaginable. When I’ve asked people how to prepare a proper cup of chai, I’ve received more answers than there are people here. The diversity of a nation of 1.2 billion people has a few unifying factors, but I’d argue that chai tea is perhaps one of the most important. And, Kerala is the backbone to this national obsession, with its foggy mountains just to the west of Kochi, covered with tea and spice plantations. 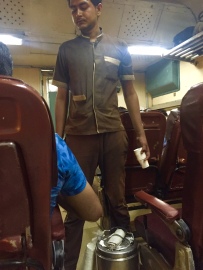 Chai seller on a train

I offer a chai recipe that is based on a few variations I’ve learned. In India, it’s impossible to buy a vegan milk option from a tea seller, though no-milk black tea variations are sometimes available (though this would not be called chai tea but just “black tea”). The ingredients list should be loosely interpreted because spice, sweetness and tea strength are quite personal and you should tailor it to your liking.

2 tbsp black tea leaves
Small knob of ginger
1 tsp cardamom seeds
1 small piece of nutmeg
A few pieces of cinnamon bark
Small handful of peppercorns
Small handful of cloves
other spice options: chili, fennel, bayleaf
4-5 cups water
2 cups soy or almond milk
honey or sugar (jaggery is an Indian raw sugar that Indians tell me is quite healthy– it is incredibly sweet and only a tiny pinch is needed.)

1. Ground all of the spices together.

2. Put water in a pot and bring to a boil. Lower to a simmer and add spices. If possible, let sit overnight. Then, reheat and add the black tea leaves to simmer for a couple of minutes.
If you don’t have this much time, then simply let the spices and tea simmer for several minutes together.

3. Once the tea-spices blend is prepared, add the non-dairy milk and warm all ingredients together. The amount of milk can vary from a small amount as a creamer to an amount equal to the tea-spice mixture. Also at this time, add sugar or honey to taste. I’ve had incredibly sweet teas and others that were sugar free and quite spicy. It depends on your preference.

10 thoughts on “Chai and Kochi Jews”