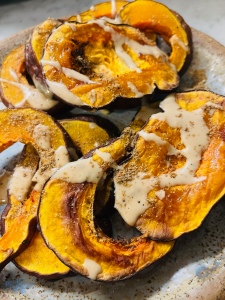 I spent the first day of 2023 in Antwerp, a city with one of the largest Chasidic populations in Europe. A famous kosher restaurant, Hoffy’s, was open and we excitedly arrived for lunch. We were told to come back in about an hour when they were ready.  We walked around the neighborhood (which abuts the city’s diamond district). The area was empty–besides Hoffy’s and a kosher market and a quick stop into the Portuguese synagogue, nothing was open and few people were out.  We returned to Hoffy’s which was filled with strong aromas wafting from the kitchen while staff hurriedly ran around getting the dining area ready, placing small flower vases and candles on tables while waiters quickly wrapped aprons around their waists.

Hoffy’s is a historic restaurant founded and run by brothers whom I assume were the men who warmly welcomed us while working the counter by the entrance. After complimentary salatim and challah and an appetizer, a waiter invited us to come to the extremely long glass counter and pick out what we want. He piled our plates high and said he would be back. The vegan options were astounding: grains, roasted vegetables, cold salads, beans, warm salads. My plate came back to me steaming with an assortment of vegetable dishes that I had chosen. One in particular stood out for me: roasted pumpkin. It was simply prepared and the pumpkin flavor was enough on its own.

Lots of people came in for take out while we savored our lunch. The restaurant is by the city’s central train station with lots of travelers stopping in to pick up food before hopping on a train. I was fascinated by the micro insular nature of the area and its relationship–both economically and historically–to the diamond district, itself just a few narrow blocks with modest, outdated, dull office buildings, despite being the global epicenter of the industry. The city is an architectural mishmash of old and new and though no one was really out, there was a cramped feeling to the neighborhood–it lacked the wide boulevards of other areas.

There are several synagogues in the area–easy for people to go to minyan during work hours. The Portuguese one was open and we were greeted by people cleaning the building who immediately instructed me to visit the upstairs.

The pumpkin recipe is inspired by my lunch at Hoffy’s. It is pretty simple and the flavors should stand on their own. There’s an incredible array of pumpkins available at my farmers market now and really any would work. 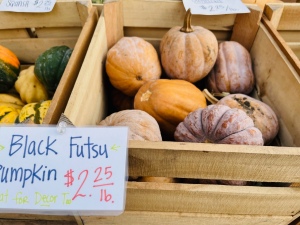 Preparation
1. Pre-heat oven to 375 degrees. Cut slits in the sides of the pumpkin for ventilation. Cooking ventilation will vary based on the size of your pumpkin. Bake for 45 minutes until soft to touch.

2. Remove from the oven and let cool. Once cool, cut open the top and remove the seeds. Cut the pumpkin into slices or pieces and place on a platter.

3. Prepare the tahini: add the tahini to a bowl and squeeze the lemon juice, minced garlic and sprinkle a pinch of salt. Mix well. Slowly add the water until you reach the desired consistency. It will initially be pasty and as you mix, it will become more liquid. If you add too much water, just add more tahini to make it thicker. Drizzle over the pumpkin and then sprinkle the dukkah over it.

4. Optional: if you want to roast the pumpkin seeds, rinse well. Place on a baking sheet. Drizzle with olive oil and salt. Bake at 375 degrees for 10-15 minutes until lightly browned.