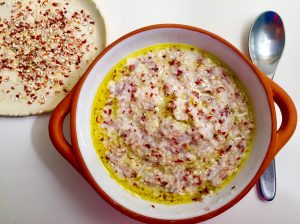 I recently spent time exploring the Lower South of the US, delving into the emotionally fraught history and legacy of enslavement and civil rights, overlaid with an exploration of Southern Jewish life. It was a provoking, at times emotionally draining, visceral, and absolutely fascinating trip that challenged me every day to examine and reflect upon the impact of our nation’s history of slavery and to explore the extraordinary and unique life of Jews in the South. 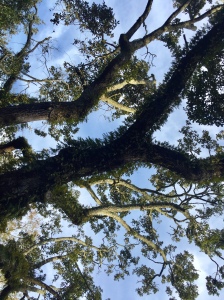 While this little blog post cannot delve deeply into all aspects of the trip, I visited many civil and human rights museums, memorials, monuments, and homes in places like Birmingham, Montgomery, Selma, New Orleans, Jackson, and Memphis. Each day, I was challenged to comprehend, reconcile, or simply witness what had happened and the continued consequences today. It challenged some of my personal assumptions and at times helped me have a better grasp on some of our nation’s current politics. Much of the physical landscape, cleared and tilled for profitable cash-crops through the exploitation of enslaved human beings and sharecroppers, has been transformed into industrial agriculture, toxic industries (Cancer Alley), eroding coastlines, impoverished small farmers, or diminishing small towns.

While in New Orleans, I visited the Ogden Museum of Southern Art, which included an exhibit by Alabamian William Christenberry, whose multiple mediums explored the South–presenting landscapes, icons, and landmarks in conflicting ways–at times stark beauty and others the blood soaked legacy of enslavement and white violence. His conflicting narratives and diffuse mediums, was often how I experienced the South: sometimes pain and other times beauty. Many moments-from standing in the Equal Justice Initiative’s museum and memorial or in Medgar Ever’s house, or walking the grounds of Whitney Plantation, brought pain and shock. Or, driving on two-lane roads from Selma to Mobile, lined with stands of pine trees rooted in orange-red soil and occasional small houses dotting the picturesque landscape, wondering what happened on these roads. What stories do they hold about our nation’s human rights, civil rights?

And, what did societal institutions like slavery or Jim Crow, or cultural phenomena, like Southern food, or social movements like civil rights mean for Jews in the South?

Going to synagogue in Birmingham was seemingly as familiar as being anywhere else in the US, but still unusual because of its physical geography. My presumptions and  ignorance about the South and what it means to be a Jewish American (having been raised as the daughter of a red diaper baby on the East Coast) that I brought, frankly made it hard to wrap my brain around Jewish Southern life at times. Seeing synagogues, especially in small towns like Selma, AL and Greenville, MS, was both familiar physically but geographically, culturally, and religiously fascinating and confusing. It was Jewish communities, like many others, dotting the globe, in small communities or large cities, who had come fleeing persecution. But, in some ways these were at times more unfamiliar or confounding than some of the obscure Jewish communities I’ve met in my travels the past few years.

Spending time at the excellent Institute for Southern Jewish Life in Jackson helped me delve more deeply into some gnawing questions and conundrums. How, had Jews not only lived, but at times thrived, in a part of American society that enslaved, discriminated, and segregated people? How could some Jews be slave owners and profiteers of slavery? Why did some Southern Jews support the civil rights movement (though seemingly some of the most well known ones came from outside the South), while others were silent or even a tiny number were part of Citizens Councils? Yes, I bring my East coast arrogance and naiveté that this oppression was exclusive to the South, but physically the Lower South became the the center of our nation’s slavery and emblematic of its racism. And, would Northern Jews, if things were reversed, have been different? No. 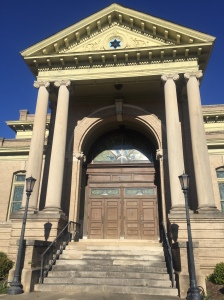 How do I reconcile this acknowledgement that Jews were just practicing Judaism and living their lives as peddlers, shopkeepers, and slave owners, with the late 20th century social justice-centric Judaism I was raised with? Why and how did Jews not only survive but often thrive, enduring less anti-semitism than elsewhere in the country, in small towns and big cities? What is the legacy of Reform Judaism first taking root in the US in the South and what are the continued differences between institutional Jewish life in the South and elsewhere in America? For example, I read one synagogue’s website description as its founding before the “War Between the States.” Or, what “Southern kosher” eating is (i.e. it can include a lot of treyf!). It doesn’t make sense sometimes to me, but it just what it is. It’s cultural adaptation and assimilation that Jewish communities, like that of others around the globe, except that as an American, this was more personal.  It’s “Jewish jambalaya”-a mishmash of conflicting ideas, practices and/or values that are sometimes inexplicable  to me, and other times familiar. They have allowed Southern Jews–from Sephardic to Ashkenazi backgrounds-to thrive across the South–partly because of of the color of their skin but also because of religious and cultural adaptations and acceptance (with caveats such as Code Noir, which initially kept Jews out of Louisiana)–even if not always fully accepted as the same as Christian whites (e.g. prohibitions on access to clubs, social circles, etc., some of which still exists). 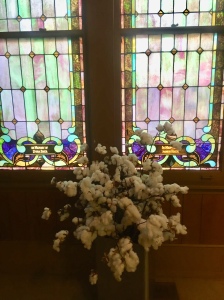 The final layer of cultural exploration on my trip was food. Before I left for my trip, I told some people whom I would be staying with that I was vegan. I heard a pause on the other end of the phone. And, then with a polite and warm Southern drawl, some inquisitive and thoughtful questions to understand what this exactly means (tip: explain to people that products simply processed in facilities with non vegan foods are ok to eat and drink!).  Despite the dearth of vegan and vegetarian restaurants outside of New Orleans, I ate so well and was always excited and slightly surprised sometimes to find vegan offerings in unlikely restaurants and bakeries.

Another tip: at restaurants, don’t expect to get a normal size glass of room temperature water without a straw, even if you ask for it. All water is served in very large glasses, with ice and a plastic straw in it.  Grits was a common thread throughout many of my meals. In Birmingham and New Orleans, I was able to pick up some heirloom grits–grown in Alabama– that offers a coarser texture and range of red and yellow colors, making it a heartier, more complex dish than the instant versions. Grits is a Southern staple–it’s plain, unassuming, delicious,  whether with a pat of vegan butter or cooked with coconut milk. While some argue that polenta–the Italian version of grits–is coarser than grits, as an ignorant Eastcoaster, I disagree. I think it’s a matter of industrial processing. The heirloom grits I got on my trip is as coarse as many types of polenta. It’s about reclaiming foods from mass industrialization. 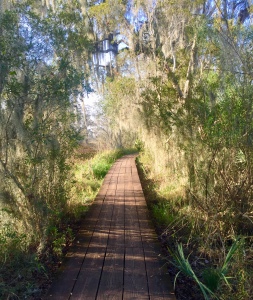 To make grits, I highly recommend finding an heirloom variety rather than a commercially processed one. 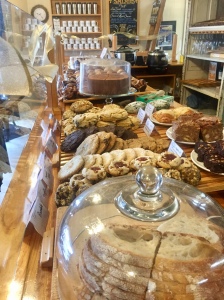 Breads on Oak, an amazing vegan bakery in New Orleans.