This is the story of an apple cake. But not the ingredients or how to make it. It’s the story of its maker—someone who brought warmth and joy to my family’s home for Shabbat meals and holidays and who selflessly cared for so many people (including painstakingly preparing a beloved cake for voracious eaters!) despite a past that was far from sweet.

The baker of the famous apple cake is Nina Merrick, an 89-year-old resident of Silver Spring, Maryland. She and her husband, Leon, have been friends of my family’s ever since I first began to study with her to prepare for my bat mitzvah, a connection that came about thanks to her lifelong commitment to teaching Judaism. 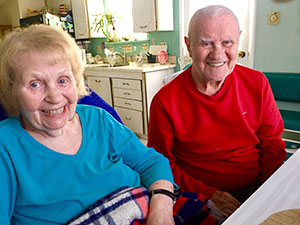 In their tidy home of over 50 years, filled with Judaica, plants, family photos and a fabulous kitchen with turquoise-colored vintage appliances, we talked recently about their lives and the cake.

Nina is originally from the town of Rokitno, once Poland, now Ukraine. Her mother was tragically hanged in Rokitno by the Nazis. Later, Nina, her father, brother and sister escaped a massacre in the town to her uncle’s tiny wooden house—crammed with four other families—in the ghetto in the town of Berezov.

But this home couldn’t protect them either. When the Nazis and Poles came, her sister froze in place. Her father stood nearby and continued to pray, his words mixed with the chaos of soldiers rushing in and destroying. Nina, 13 years old at the time, was pushed out the window, and she ran into the woods alone. She eventually found her uncle and later two cousins who had also escaped. (While her brother was not home that day, a childhood friend later killed him over a bag of salt.)

She and her surviving relatives joined the partisans, with Nina dutifully caring for injured fighters. She eventually met Sidor Kovpak, a Russian leader of the partisans, who took her under his wing. He sent her to study in Moscow, where she also worked in a munitions factory and earned a Communist Party card (later torn up by an irate cousin after the war).

After the war, while in a DP camp, Nina was found and brought to Washington by a cousin who worked for the United Nations Relief Agency. She lived with an aunt and uncle in their home at 16th and Taylor Streets.

Though Leon was born in Zgierz, Poland, his family moved to the Lodz ghetto. At 16, he was sent to the Kelce labor camp, then the Flossenburg concentration camp and finally to Buchenwald, where he survived a forced death march. After the war, Leon worked for the American army in Nuremberg. In 1949, he, too, moved to Washington, DC, and lived in a rooming house in Columbia Heights.

It didn’t take long for Nina and Leon to find each other; they met at a party hosted by Nina’s aunt. They were married in 1952 and had two children, then two grandchildren, a lifelong membership at Temple Sinai and the same home since 1964. And throughout, food has also been integral to their lives.

For decades, Leon owned a takeout restaurant in the same building as the US Secret Service. As the late night started to become early daylight, Leon would start his day, preparing soups and sandwiches for government employees.

For as long as I have known them, Nina and Leon have brought not just a freshly baked cake to meals, but also countless stories of Poland, Ukraine, Russia and extended family across the globe—all peppered with strength, determination and calmness about the calamities they have survived. Despite it all, they exude joy and warmth—just like Nina’s modest, comforting cake.

When I visited Nina and Leon recently, I gently explained that I no longer eat eggs and asked for their approval to adapt the recipe accordingly. My question seemed bizarre to them, but they just smiled and gave me the go-ahead, accommodating and adaptive as they have always been. 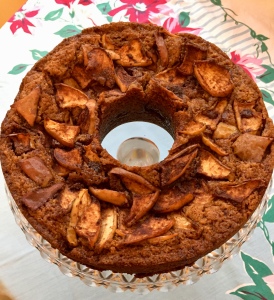 A note written by Nina (click to enlarge): “Humanity should strive to pursue peace and fight to eradicate prejudice, bigotry and antisemitism. My obligation as a Hol. survivor is to tell the story of my survival, thereby to honor the memory of my family who perished. Confront hatred, promote human dignity”

The full story originally appeared on the Jewish Food Experience.