This originally appeared on the Joy of Kosher website.
This week, in Bo, the remaining three plagues—locusts, darkness and the death of first-born sons–-are inflicted upon the Egyptians. While Egypt was shrouded in darkness, “all Israelites enjoyed light in their dwellings” (Bo, 10: 23).  How, despite the plagues and the continuing hardening of Pharaoh’s heart, did the Israelites live at the precipice of freedom and eventually gain freedom?

The Sefat Emet teaches that “God had already placed in Egypt hidden treasures that Israel had to take out. . . . When they clarified the lights that came out of such a place, they would go on to live [and shine] throughout the generations.” (The Language of Truth, Translated by Arthur Green, pgs 93-94).

Led by Moses, they embodied light and strength for both their liberation and the birth of the nation of Israel.  According to R. Levi, Israel was “no more than a heap of barren rocks. But, after they left Egypt, they became like a flourishing orchard of pomegranates.” (Sefer Ha-aggadah, p.71). The recipe that I created for Bo is inspired by the concept of finding light and strength in darkness, as well as the Israelites transformation.

The dish is made with slivered almonds, beets, black quinoa and pomegranate seeds, served in a narrow dish to represent the constriction of Egypt. Aviva Gottlieb Zornberg expands upon the Sefat Emet’s teaching, explaining, “redemption from Egypt (mitzrayim) is a freeing from the “narrow places,” the meitzraim, the straits of the soul, into an expansiveness in which all potential is realized” (The Particulars of Rapture, p. 197).

The almonds are covered—like hidden treasures in darkness— by beets and black quinoa. The beets are plain—like the barren rocks that the Israelites were in Egypt. The quinoa is topped with a sour, spicy sauce, as a reminder of the bitterness of life in Egypt. One end of the dish is piled with pomegranate seeds to symbolize the Israelites transformation to a “flourishing orchard of pomegranates” after their departure from Egypt.

We each have a duty to fulfill our potential in the world through mitzvot that bring the light of Torah to the darkest places of the world. The Israelites journey from confinement in Egypt can inspire each of us to be lights of righteousness in the face of suffering and affliction today. We flourish, like the Israelites, when we do such acts. 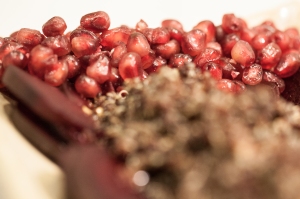 1. Pre-heat oven to broil. Scrub beets and wrap in tinfoil. Place on tray and put in oven to roast, approximately 45 minutes (ready when a knife can easily be inserted). Remove from oven and let cool. When cool to touch, remove skins, trim ends and slice into rounds.

2. Mix 1-cup quinoa with 2 cups water in a pot with lid on stove. Bring to a boil and then let simmer for approximately 15 minutes until all liquid is absorbed. Fluff with fork once cooking is complete.

3. Remove seeds from the pomegranate.

4. Mix all liquid ingredients together and add salt and pepper to taste (it should be a slightly spicy and sour sauce).