Lech Lecha tells the story of the birth of the Jewish people through Avraham’s prophecy.  God tells Avram, “I will bless you and make you a great nation.”  As Diane Bloomfield taught this week about Lech Lecha, “God is bringing in a radical new creation with different qualities of what it means to be a human being and the potential becoming of a Jewish nation that brings blessings into the world.”

In the parsha, Avraham is sent on a challenging journey to unknown land, despite God’s promise to protect him and Sarah. It is fraught with dangers, famine, and personal challenges. As Yael Shy wrote, the unknowingness of journeys can create unease and fear in oneself, as is true for Avraham. But, as she continued, “God is telling Abraham to stop trying to predict or figure out or gain control of what that which he is not in control.”

His journey is not about where he has been or his previous actions but where he is going and the potential for the future.  He’s a baal teshvua: someone who lives in the process of what he can become, not what he did, according to Diane Bloomfield.

In contrast to Noah, who lives in an ark in retreat from the evilness in the world, Avraham takes a different path.  In his journey, Avraham experiences what will happen to the Jewish people-there are dangers, doubts and challenges. As Diane pointed out, instead of retreating from these challenges, Avraham immersed himself in the world an attempt to fulfill his role of bringing redemption to the world. Like the Jewish people are also instructed to do, Avraham works to bring light and the presence of God to places filled with despair and darkness.

Avraham goes to Egypt because of famine. We live in a world where there are nearly 850 million people worldwide (1:8 people) go to bed hungry. In the US, 46.5 million Americans (including 12 million children and 7 million seniors) are hungry at some point in the year.  Much of this hunger is not because of a lack of food in the world. Rather, it is largely due to people’s access to food and control of their food systems (food sovereignty).  This access is often thwarted because of corporate food conglomerates’ and governments’ market-centric policies that weaken local food systems and economies, lessen access to healthy foods and hurt local environments.

I just returned from the incredibly inspiring Terra Madre conference where I met farmers, activists, chefs, food purveyors, breeders and fisher people from around the world. Over 3,000 delegates from more than 120 countries shared stories about their cooperatives and family farms  (which provide 75% of the food for humanity), their work to strengthen food systems to ensure their local communities are food secure and their growing and producing of healthy, ecologically and culturally relevant foods.

There are many groups–including several Jewish ones–working in the US and around the globe in the food sovereignty movement. From Hazon, Mazon and Netiya in the US to Slow Food Israel to American Jewish World Service, these organizations are living the values of Avraham. They are not retreating. They are engaged in the world, working for more equitable food systems that empower individuals and communities, increase access to healthy foods and preserve culturally relevant, healthy, heritage foods. 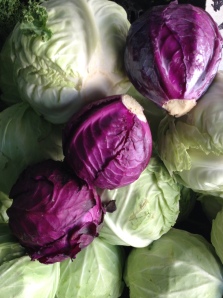 The recipe I created this week is symbolic of Avraham’s journey and covenant with God. Avraham is given five blessings and is shielded by God as he embarks on his journey.

The dish has five vegetables that represent these blessings. There are contrasting colors and tastes (carrots, scallions, peppers) and purple and white cabbage. The cabbages are the same vegetable in different colors, representing the contrasts/similarities and ultimate interconnections in the story (Avraham and Lot, Sarah and Hagar, Isaac and Ishmael). The vegetables are cut into long ribbons, symbolizing each of our journeys that happen together as Jews through our covenant with God (wrapped in lettuce-God’s shield of Avraham).

There are ground nuts, symbolizing the “dust of the earth” mentioned in Lech Lecha that we each come from and return to. And, there are two dipping sauces that are made from foods commonly eaten now in Israel: pomegranate molasses and tahini. Our journeys are not about the past but the potential future and by placing dollops of each on the opposite ends of the lettuce, they represent where we were and our potential for the future-from darkness to increasing light in the world.

1. Wash all vegetables and slice and peel.

2. On a platter, arrange the lettuce leaves in the corners and the vegetables lengthwise in the center, along with the small bowl of ground nuts. Pour pomegranate molasses into a small bowl and place at one end of the platter.

3. In a small bowl, add 1 tbsp tahini and then slowly add cold water until it becomes thinner and lighter in color. Add a squeeze of lemon juice and small pinch of salt. Stir well. Place at opposite end of platter to pomegranate molasses.

4. Each person can create their own wrap, by placing the vegetables lengthwise on an open piece of lettuce, sprinkling nuts, drizzling pomegranate molasses at the bottom of the vegetables and then tahini towards the top. Then, roll and wrap a strip of carrot to hold in place.

13 thoughts on “Lech Lecha: From Dark to Light”