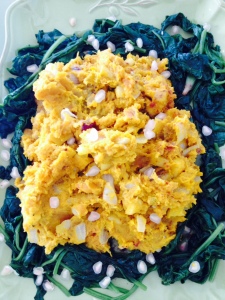 The Garden of Eden dish is inspired by many of the symbolic foods eaten on Rosh Hashana and the story of the garden. According to Talmudic rabbis, Rosh Hashana falls on the sixth day of the creation of the world when humans were made.The conflicting notions of beauty, sins and judgement were unleashed in the Garden of Eden.   Humanity was created, sinned and judged. As a result of human’s actions, the pains of the world–violence, death– were exposed.